It’s been a distressing year with several more Australians dying from electrocution.

The loss of a life has a ripple effect, not only are these cases devastating for the victim, their family and community – but also the first responders.

It’s important we understand what led to these electrocutions and what can be done to prevent similar events happening in the future. On 7 December 2002, I arrived at work for my nightshift. The team were attending a property where a deceased person had been located.

In NSW, if police cannot obtain a doctor to provide a certificate as to a cause of death, police must investigate the matter on behalf of the coroner and detectives are required to attend. The death is suspicious until proven otherwise.

The deceased, 79 year old Christine Williams* was located in unit 49 of a retirement complex built around 1985. This unit was on the upper level of a three-unit, freestanding brick structure. Friends raised the alarm when Mrs Williams failed to attend an appointment.

Mrs Williams’s unit adjoined units 48 and 50 on that level, together with two garages and storage rooms which were located on the ground floor.

On arrival, so as not to contaminate any potential crime scene, I put on latex gloves and with colleagues entered the unit. In the bathroom I saw the body of Mrs Williams, clearly deceased, in the shower, holding a white handled, flexible shower hose. The shower was still running.

Wishing to preserve the scene, we exited the building and awaited the arrival of our crime scene officer, Detective Sergeant Phil Elliott.

Shortly after Detective Elliott’s arrival, we again donned latex gloves and entered the unit. After a general examination Phil identified that Mrs Williams was “‘live’.” I saw a small trail of smoke coming from her hand which was blackened where she was holding onto the shower handle and I could hear a sparking noise.

As we made a hasty retreat from the unit, we noted that all the electrical appliances and lighting in the unit appeared to be working as normal. I contacted my criminal investigation team to attend whilst Phil contacted Sydney Electricity requesting their attendance as is standard operating procedure for incidents involving death or serious injury from electrical sources.

Around this time, Steve McGee from Sydney Electricity arrived, and after a short briefing, we re-entered unit 49. Mr McGee would take electricity readings using a voltage detector. In the bathroom area of the unit, Mr McGee activated the voltage detector, it immediately flashed and emitted a tone. I initially asked whether his device was faulty, however after walking into the kitchen then the hallway near the front door, Mr McGee firmly indicated that the whole unit was ‘live’ and we should immediately leave. Once outside, Mr McGee informed us the only reason we had not been electrocuted was the fact we were wearing thick, rubber-soled boots and latex gloves.

Measurements within unit 49 revealed readings of 240 volts from the tiled shower floor, 237 volts from the floor waste, 170 volts on the shower screen, 112 volts between the shower rose and floor and 111 volts from the external downpipe near the front door of which we had been leaning against awaiting his arrival. According to Associate Professor Trevor Blackburn from the University of New South Wales, an AC (alternating current) of 100 volts is enough to cause the electrocution of a person in normal circumstances.

After obtaining keys to unit 50, we carefully gained entry and located the resident, 81-year-old Pamela Grey*, also deceased in her shower. She was also holding onto the flexible shower hose, although in this case the water was not running.

After isolating the power to the complex and ensuring the area was safe, a meticulous investigation into the cause of the deaths was undertaken.

In addition to the police, the investigative team included Colin Levingston, an Installation Inspector with the electrical service provider Energy Australia, Associate Professor Trevor Blackburn from the School of Electrical Engineering & Telecommunications, The University of New South Wales, electrical and structural engineers, a metallurgist as well as specialist electrical network testers.

On 9 December 2002, Colin Levingston conducted tests on the electrical circuits within the building. One circuit, which controlled the unit’s lights, indicated a fault of a serious nature that would require further investigation. There was a fault in the lighting wire between the wire supplying 240V, known as the active wire, and the earth wire.

“Later testing by Energy Australia indicated that although the lights in the garage may have been off, the fault existed whenever the switch at the garage main door area was in the ‘on’ position.”

On the morning of 10 December 2002, specialist electrical network testers were engaged to identify the track of the faulty light circuit and were able to not only identify the track of the cable in the concrete slab but the exact position of the fault within the lighting conduit. This fault was found to be directly under the bathroom floor of unit 50. 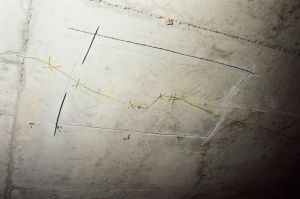 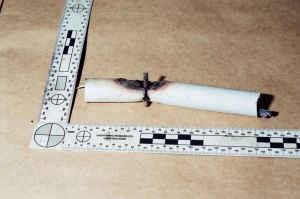 On the 17 December 2002, the team attended the unit complex to excavate the faulty light circuit. After dismantling the exposed plumbing from the bathroom of unit 50, sufficient concrete was removed to reveal the conduit of the light wiring. The excavation of the fault site revealed a 5mm in diameter circular metal shaft, similar to a nail, protruding from the underside of the lighting conduit. There was rust on the metal shaft and in the concrete surrounding the shaft indicating exposure to moisture.

Professor Levenson informed investigators that whilst concrete is usually a poor conductor of electricity, when wet, its conductivity would allow it to pass enough current and voltage to cause electrocution. Additionally, metal reinforcing rods contained within the unit’s concrete would also assist in spreading the current and voltage throughout the slab when wet. Given the long-term leak from the washing machine taps in unit 50, it appeared that moisture had penetrated the grout material and entered the concrete. One end of the metal shaft was located within the tile grout and aided in allowing the moisture to penetrate down to the conduit via capillary action.

“As the sand cement grout was porous, the moisture was distributed widely resulting in a number of areas of the units becoming electrically live.”

Examination of unit 50’s bathroom floor showed the corresponding position of the metal shaft was in the centre of the floor in an area of bare tiles. There was no fixture or evidence of repair at that point in the bathroom to indicate a possible reason for the existence of the metal shaft.

The damaged wire within the conduit was bent downward indicating an impact with an object inserted from above, this being the tile/grout side of the concrete slab. Significant force would have been required to propel the object through the concrete and both sides of the conduit. This metal shaft was later identified by a metallurgist as a high-velocity power tool nail.

The examination concluded the nail was the cause of the electrical fault and the electrocution. The metal nail was in contact with the copper portion of the electrical wire within the damaged conduit. This supplied a voltage to the floors of the two bathrooms above the garage. While Professor Blackburn could not accurately determine how long the metal nail had been in the conduit, there was significant damage to the conduit at the point where the nail met the copper wire.

This damage was consistent with long-term, intermittent, low-level current flow; the fault being intermittent due to when the light was switched off at the main garage door, the damaged portion of the wire was disconnected from the electrical supply.

Once the source of the electrical supply was conclusively determined, investigators sought to identify why the electrocution took so long to occur if in fact the fault had been in existence since construction. A likely scenario was that an impact driver had been used to fix diagonal timber framing supports for the brick bathroom walls during construction in 1985.

Professor Blackburn and investigators considered a number of possibilities, however the gradual accumulation of moisture in the concrete over a long period of time was deemed to be the most likely cause.

All the necessary factors to cause a fatal electrocution had aligned. The concrete slabs had gradually accumulated moisture. The garage light switch had been switched off from the internal door of the garage rendering the wire penetrated by the nail to be live. The moist concrete slab allowed voltage to be conducted to the grouting and the bathroom shower floors.

Once the women stepped into the shower and took hold of the earthed flexible metal shower head, they received a fatal level of electrical current through their bodies.

Coroner Pinch subsequently determined that both women died as a result of being accidentally electrocuted. Deputy State Coroner Pinch made a number of recommendations including a recommendation in relation to the installation of safety switches on lighting circuits.

Whilst it is extremely sad for all involved, the circumstances of this incident highlight the dangers of modern policing – that you literally never know what you are walking into, and in reality, no death of a person is ever simple.

Sadly, 18 years on, little has changed.

Many deaths could have been prevented if there were safety switches on all circuits in all buildings, not just new builds.

In 2010 Master Electricians Australia funded a major research work on electrical deaths in Australia. The report titled ‘Switch Thinking’ found around 15 people are killed and 300 hospitalised nationwide each year as a result of preventable electrical accidents.

Tragic accidents such as the story shared by Detective Superintendent Paul Devaney should provide the impetus to reform safety laws – in this case, slab earthing and safety switches (both of which would have saved the ladies lives).

They say time heals, but that’s not always the case in policing.

Paul Devaney has not forgotten these victims and the situation that led to their deaths. Amongst the grief is also the realisation that all the first responders on site could have become victims
“the slab floor had electricity running through it and we were leaning on a downpipe that also had current passing through it. It was only our thick rubber soled boots that saved us that day, thinking about this, still sends a shiver down my spine”
said Detective Superintendent Paul Devaney.

MEA advocates on behalf of members and
the broader industry.